Did You Know... Interesting Thanksgiving Facts...

You can use these facts to impress your dinner guest this Turkey Day! 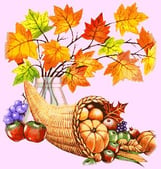 Wishing you a Happy, Healthy, Safe and Peaceful Thanksgiving Holiday!