Newman Consulting Group, and Jim Newman personally, have been recognized for excellence by many industry organizations and professional publications.

Jim Newman was honored as a Fellow of the international ASHRAE organization, January 2021. According to the organization’s announcement, “Fellow ASHRAE is a membership grade that recognizes members who have attained distinction and made substantial contributions in HVACR and the built environment, such as education, research, engineering design and consultation, publications, presentations, and mentoring.” Newman was one of the 14 members to receive this honor at the 2021 year's virtual conference. Some of Newman's contributions to ASHRAE are the Climate Change Chapter in the 2021 Handbook of Fundamentals, executive committee of the MI COVID-19 Task Force, a Distinguished Lecturer speaking internationally since 2010 and a member of several Task Force Groups.

Jim Newman was honored with BOMA Metro Detroit’s (Building Owners and Managers Association) Lifetime Achievement Award at the organization’s Annual Meeting on December 6, 2019. The award is presented annually to a member who “exemplifies outstanding leadership and achievement.” Mr. Newman was recognized for his many years of service and for “a demonstrated ability and commitment going beyond the expected standards for service and professionalism.” See details of the award.

Newman Consulting Group was recognized by CV Magazine's Energy Innovator Awards, October 2019, for leading companies and individuals who strive for excellence in the important and evolving energy innovation sector. NCG was recognized for their work improving energy conservation and air quality in new and existing buildings, as well as providing financing for energy conservation projects through PACE (Property Assessed Clean Energy) and other methods, and for supporting LEED® (Leadership in Energy and Environmental Design) Certification projects.

Jim Newman has been named one of the year’s Environment + Energy Leaders by industry hub Environmental Leader. The award recognizes industry leaders who are making significant strides in driving the industry forward. Honorees were formally recognized at the E+E 100 Luncheon during the Environment & Energy Manager Conference (ELEMCON) in Denver, May, 2019. See a complete list of honorees here. 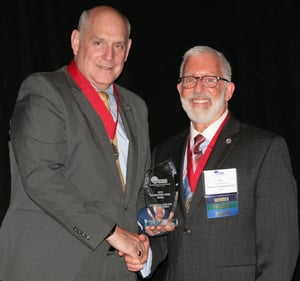 In December, 2017, NCG was commended for work on preserving The Whitney Restaurant using PACE (Property Assessed Clean Energy) to finance new building energy systems. The Exemplary Project Award, presented annually by the GLREA, recognizes the renewable energy or energy efficiency project that demonstrates the most innovative and practical use of technologies and methods for creating or conserving energy.

ASSE Engineer of the Year

In February, 2017, Jim Newman was recognized by ASSE (American Society of Sanitary Engineering) with the John E. Matthews Award for Engineer of the Year, which is given annually to an engineer who best exemplifies the professionalism during his or her career as displayed by ASSE member and leader John Matthews, PE, CIPE, FASSE.

In September, 2015, Jim Newman was named an EcoWorks Sustainable Communities Champion. Newman, along with two other Michiganders and a local organization, were recognized at the EcoWorks annual breakfast for demonstrating a deep commitment to modeling sustainable solutions, and perhaps more importantly, encouraging others to adopt sustainable practices as well. Former Michigan Governor, Jennifer Granholm, was the keynote speaker at the annual event.

In October, 2012, Jim Newman was named an Association of Energy Engineers "Legend in Energy." This mark of distinction is bestowed to qualified professionals who meet certain criteria of recognition or service to the organization.

A Life Member, Newman is an ASHRAE-Certified Operations and Performance Management and Building Energy Assessment Professional, and also serves as an ASHRAE Distinguished Lecturer. He is a past member of the ASHRAE Detroit Chapter Board of Governors, and has served on various international technical and policy committees. Since 2002, he has been a certified trainer on ASHRAE/ANSI/IESNA Energy Standard 90.1, and has trained hundreds of architects, engineers and facility managers on the Standard.

Some of Mr. Newman’s topics include: LEED and Integrated Design; Tax Deductions from the Energy Policy Act of 2005; Transforming an Older Building into a High-Performance Facility, to name only a few. To see a partial list of topics please visit the ASHRAE website. For further topics, see Speaking Engagements.

In February, 2010, Jim Newman was nominated along with 350 other individuals, businesses and non-profits for the prestigious ‘Michigan Green Leader’ award. Out of 350 nominations, 16 companies or individuals were awarded the ‘Michigan Green Leader Award’ and fourteen others, including Jim Newman, received ‘Honorable Mention.’ The judges of the event stated that the additional winners were selected because they were deemed as individuals/companies that showed significant merit in the field of innovation, job creation, products and services, sustainable development, community advocacy, conservation and much more.