FRESH AIR FUNDAMENTALS. Fresh air being key to good health, it's a shame we cannot rely on the supply and quality of our indoor air these days. Thanks to technology, our building envelopes - the physical separation between the interior and exterior of a structure - have grown significantly tighter. One hundred years ago people enjoyed generous amounts of OA (Outside Air) flowing through gaps in doors, windows, joints, and cracks. A cool draft through an old building was typical and necessary for a good ghost story. However, the cost of energy and technology has changed our perspective on drafts as well as mechanically cooled or heated air. We don't want to pay extra to heat or cool more air than we have to due to excessive outdoor air coming in or conditioned air leaving the building before delivering its full potential. Tighter envelopes lessen the avenues for air entry and escape in order to achieve energy savings. So ... tighter envelopes that reduce energy costs as well as the amount of emissions fleeing into the atmosphere is a good thing, yes? Naturally, but as with most things, you can have too much of a good thing.

According to the EPA, "Indoor levels of pollutants may be 2 to 5 times - and occasionally more than 100 times - higher than outdoor pollutant levels {and} have been ranked among the top five environmental risks to public health."

Such pollutants - unpleasant odors, chemicals used in manufacturing or outgassed from furnishings, dust, CO2, humidity, and particles - linger within a tight envelope and increase if not exchanged regularly with outdoor air. So we still want OA in our lives, but we need to get it while not wasting the precious heating and cooling energy. Enter the ERV (Energy Recovery Ventilator), a piece of technology that offers fresh air, heating, cooling, and dehumidification without the cost and moving parts of an air conditioner.

BENEFITS OF ERV TECHNOLOGY. Mechanical ventilation via ERVs strikes a balance between a healthy, energy-efficient environment and cost effectiveness. ERV units import fresh air and expel stale air while a heat exchanger within the unit recovers energy from the air heading outdoors. The lack of cross-contamination in these units allows the system to cool and dehumidify incoming air during warm weather and to draw heat from expelled air to pre-heat the incoming air in cold weather. 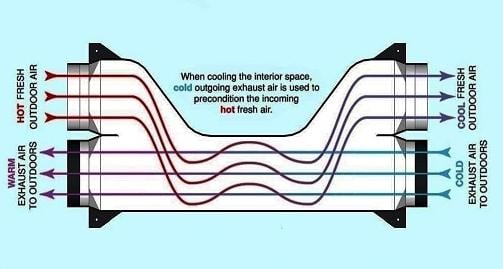 How well the ERV adjusts and maintains these temperatures determines the unit's efficiency rate of heat transfer. In many ERVs, this rate varies between 45% to 65% efficiency. (BPE, Inc's "Long-Ass" ERVs have boasted rates as high as 70% to 98%). Another consideration in choosing an ERV is its Energy Efficiency Rating (EER). The higher, the better!  (BPE units typically rate between 36 and 120 EER, while the HVAC industry averages 10 EER.)

STANDARD PRACTICE. The American Society of Heating, Refrigerating and Air-Conditioning Engineers (ASHRAE) has established standards that specify minimum ventilation rates for new and existing buildings that are intended to provide indoor air quality acceptable to human comfort and health. Standard 62.1 covers commercial structures, while Standard 62.2 covers residential. To obtain copies of these standards, visit the ASHRAE bookstore. To meet these standards, not only is it important to review an ERV's spec sheets, you must determine airflow requirements for your space. Failure to do so can result in not meeting ASHRAE standards and/or not optimizing your reduction in energy costs.

DETERMINING AIRFLOW (CFM). Don't be intimidated; the formula for pinpointing the size of the ERV your space needs is not hard to follow. Step one is determining how much air in cubic feet per minute (CFM) your ventilation system needs to move per hour.  A simplistic rule of thumb is to assign a generous 20 cfm requirement for each occupant. For example, if 20 people regularly occupy a lecture classroom, 400 cfm of mechanical ventilation would be required to meet ASHRAE standards. ERVs include their cfm specs in the product name. In our example, the BPE ERV of choice would be the BPE-MIR-XE-500, which would meet standards (that 400 cfm) with a bit of added oomph (100 cfm) to spare.Of course, it's always better to make decisions based on a more accurate equation that includes the floor area. Consult ASHRAE's Table 6.1 (found in ASHRAE standard 62.1) to plug the minimum values for various types of spaces into the following formula:

Let's assume our lecture classroom has a floor area of 2,000 sq.ft.:

FAN SELECTION. The two fans that must be set up with the ERV unit come separately. Their selection is typically based upon the air flow rate (CFM) of the building which is compared to the ventilation system's static pressure. It's an important consideration since the essence of an ERV is to provide ventilation through a balanced pressure system where fresh airflow (CFM) is equal to the outgoing, poor quality air. If the air pressure throughout the system is too heavy (due to a fan that is too powerful), we have positive air pressure that can promote too much humidity and condensation, resulting in mold and rot, and a possible breeze throughout the space. Also, too much heat can escape from the building, wasting all the wonderful potential to recover and use it. If a fan is not powerful enough, we wind up with negative air pressure, where not enough incoming air is conditioned and may also lead to mold. Higher energy costs are another factor.

The static pressure we battle is a simple matter of physics: It is the result of total pressure drop or negative pressure that the air butts up against on its way through a building's HVAC system. From the moment air enters the ERV unit it faces the pressure drop incurred by the ERV itself. Then it's an uphill battle against filters as well as the distance, design, and surface material of duct work. So, in choosing fans, the goal is to choose models that have the power to move the amount of CFM necessary for our space while overcoming the static pressure incurred by the ERV, filters, and ductwork-without incurring that noticeable breeze. We need an effective balance between the forced air and the resistance it meets. 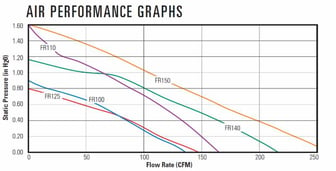 f water or the amount of static pressure needed to suck one inch of water into the first inch of a straw. The instrument used to measure this is a pressure gauge called a manometer. By comparing static pressure with your required CFM on a chart similar to the one below from Fantech Fans you can choose a fan feeling confident it can help maintain a balanced pressure ventilation system.

Variable speed controls may also be added to control air flow in order to balance the installation more precisely.

For more information, or to ask about ventilating unusual spaces, contact BPE.