Will they affect adoption of LEED V4?

END_OF_DOCUMENT_TOKEN_TO_BE_REPLACED

LEED-Certified Buildings: Energy Efficient or Not? 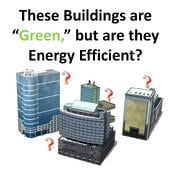 There has been some heated discussion lately about how much energy LEED® certified buildings use. When the US Green Building Council (USGBC) first came out with its Version 1 LEED Guideline in 2000, a building could earn LEED certification without any points in the energy section.

END_OF_DOCUMENT_TOKEN_TO_BE_REPLACED

By now you may know that the much anticipated release of LEED 2012 has been postponed. Introduced last November at the Greenbuild Convention, LEED 2012 was supposed to replace LEED 2009 V3 at this year’s convention. Because of so many major changes, and a great deal of excellent feedback from the membership, USGBC made the wise decision to push back the release of this next version for another year and refer to it as LEED V4 rather than LEED 2009.

END_OF_DOCUMENT_TOKEN_TO_BE_REPLACED

If you are considering or in the process of applying for LEED for Existing Buildings: Operations and Maintenance (LEED EBOM), you will want to know about LEEDuser’s “LEED-EBOM Stress Test – Credit-by-Credit Readiness Review.” This comprehensive road-map is 85 pages of tips and tools that will make it easier to get more points for your LEED EBOM project.

END_OF_DOCUMENT_TOKEN_TO_BE_REPLACED

There is a common misconception that a "Green" or LEED®-certified building has to cost considerably more than a run-of-the-mill design that just meets minimum building and energy codes.  While this was true in the early days of the US Green Building Council (USBGC) LEED (Leadership in Energy and Environmental Design) Guidelines, it is no longer the case 10 years later.