In 2015, Wayne State University’s Academic Administration Building, Detroit, MI, was facing many of the same concerns as other office buildings of similar age. Tenants (in this case University employees) repeatedly complained to building maintenance staff that they were “too hot” or “too cold.” And the costs of running the building kept creeping up.

As part of a DTE Energy and Nexant Retro-commissioning (RCx) project for no-cost and low-cost energy conservation measures (ECMs) with short-term payback, Newman Consulting Group (NCG) conducted an ASHRAE Level 2 Energy Analysis and RCx Study on the building. We uncovered several opportunities that would not only make tenants more comfortable, but also save money. The DTE RCx program, however, dictated that any measures eligible for rebates from DTE under their Energy Optimization program could not be included in the ECMs implemented for this project, e.g., LED lighting, high-efficiency motors, or VFDs, to name a few. Still, we were able to make significant improvements. 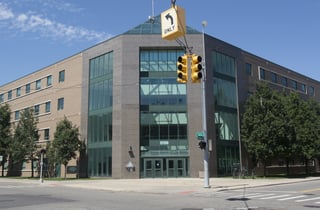 A 4-story, steel-framed office building built in 1995, the AAB houses offices, conference rooms and training areas and is generally occupied 8 a.m. to 5 p.m., Monday through Friday. The rectangular structure has concrete curtain walls, a window area of approximately 10%, and a flat roof.  A vaulted atrium greets visitors entering the building. All 131,000 SF within the building are conditioned.  The AAB is essentially an all air system building, with a single VAV air handler unit (AHU) with Variable Speed Drive serving each floor.  A Centralized Building Automation System (BAS) controls the major HVAC equipment.

The three greatest opportunities for savings involved adjusting the mixed air dampers, shifting the economizer setpoint, and optimizing the AHU schedules. Together, these measures realized an estimated savings of more than $20,000 per year after just a $5,000 investment. In terms of simple payback, the University would recoup its investment in just a few months, while continuing to save money for many years down the road. For details on how much energy and money we saved, see the Project Profile here.

After the retrofits were completed, we conducted two weeks of measurement and verification (M & V) using the BAS and trending information to ensure everything was operating properly and our savings estimates were being met. In reality, the savings were somewhat greater than we had anticipated. The building occupants were a whole lot happier as were the building engineers and maintenance personnel, not to mention the V.P. of Finance.

For more information to or to see if you qualify for the DTE RCx program that includes a free energy audit, contact Newman Consulting Group.